Geography The Cook Islands consist of 15 islands scattered over some 2 million square kilometres of the Pacific Ocean. They lie in the centre of the Polynesian Triangle, flanked to the west by the Kingdom of Tonga and the Samoa´s and to the east by Tahiti and the islands of French Polynesia. The capital island of Rarotonga, lies directly south of Hawaii and is the same distance south of the equator as Hawaii is north. The Cook Islands is just to the east of the International Date Line and is ten hours behind Greenwich Mean Time.

History The islands are first thought to have become inhabited sometime between 500 and 800 AD, by people from islands in what is now known as French Polynesia. They came in great double-hulled canoes, navigating by using familiar stars, wave movements and temperature differences. These colonizers were believed to have been the last wave of the Polynesian Migration from Asia that began in 1500BC.

The first record of Europeans in the Cook Islands came in the late 16th Century with the Spanish explorer Alvaro de Mendana sighting the Northern Group island of Pukapuka on August 20, 1595. Another Spaniard Pedro Fernandez de Quiros stopped for provisions in Rakahanga on March 2, 1606. After this there is no further record of European contact for 150 years, until Captain James Cook explored the group in his expeditions of 1773 and 1777. In spite of the islands eventually becoming the namesake of the great navigator, Cook personally only went ashore on the then uninhabited island of Palmerston. Remarkably, Cook also never sighted the largest island, Rarotonga: That honour was left to the mutineers on HMS Bounty, who landed on Rarotonga in 1789, during their escape to Pitcairn. Cook had named the group the Hervey Islands, after a British Lord of the Admiralty, but they were renamed Cook Islands, in honour of the great explorer, some 50 years later by the Russian cartographer, Admiral John von Krusenstern.

European settlement in the Cook Islands began with the arrival of the famed Reverend John Williams of the London Missionary Society, who landed in Aitutaki in 1821 and then on to Rarotonga in 1823, and who, with the assistance of various other missionaries, succeeded in converting the natives to Christianity.

On October 26, 1888, Captain Edmund Bourke of the British Admiralty hoisted the British Flag on Rarotonga and other islands of the Southern Group and declared the islands to be part of the British Dominions. Subsequently an Imperial Order in Council in the New Zealand Parliament on May 13, 1901, permitted the annexation of the Cook Islands to New Zealand and came into effect on June 11, 1901, following a discussion with the Paramount Chiefs MAKEA and NGAMARU ARIKI as well as others. On August 4, 1965, after adoption of a Report by the Cook Islands Legislative Assembly, the Administrator of the Government of New Zealand at the time signed the Proclamation to declare the Cook Islands a Self-Governing State.

The economy of the Cook Islands is based primarily on Tourism, but also has a substantial offshore industry. The country is also a producer of Black Pearls. 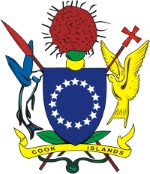